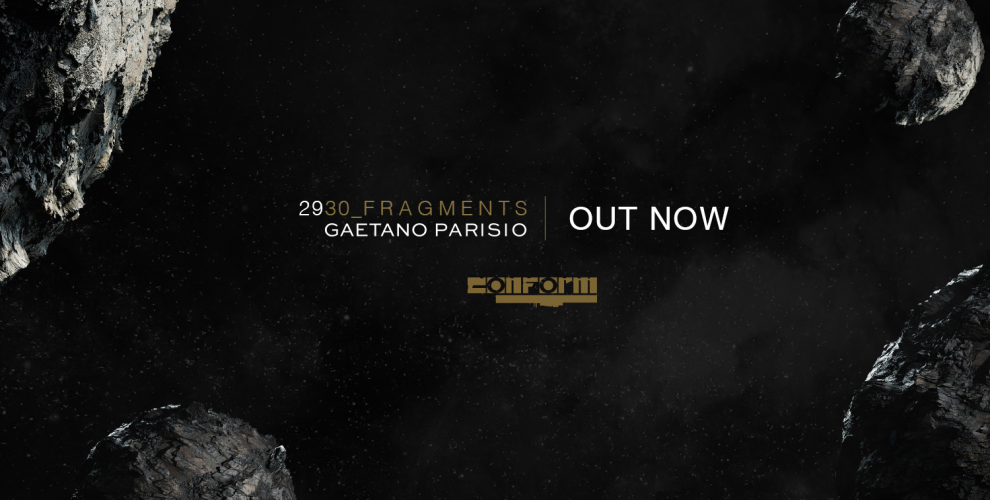 Following a 15-year hiatus from publishing, Neapolitan techno’s founding imprint – Conform Records – made an emphatic resurgence in 2020 to resume its intrinsic role in the progression of electronic music, ensuring that the genres’ virtuous roots and formative values remained instilled within its future. Having re-released its entire back-catalogue in digital format from its original DAT distribution in the 90s, label head Gaetano Parisio now shifts his focus to the modern audience, with contemporary records that serve to marry these two golden eras of dance music.

Showcasing his immense theoretical knowledge and authenticity, earned through decades of experience in the industry, Parisio’s latest project – his 6 part ‘Fragments 2930’ EP – honours the meditative euphoria of Conform’s early releases. Militant and driving in their effect, each cut presents its own melodious theme; running parallel to the strong percussive undercurrent of high impact techno that can be heard across the extended player. ‘Fragments 2930’ was initially conceived as a single sound block and later fragmented into these 6 single units. As represented in its title, ‘Fragments 2930’ also includes the catalogue numbers 29 and 30, with the double vinyl characteristic of a 2-release miniseries.

Available to purchase on vinyl from May 27th and across digital platforms on June 10th, Gaetano’s latest release is further proof that the label’s discography now only grows to hold more future classics.