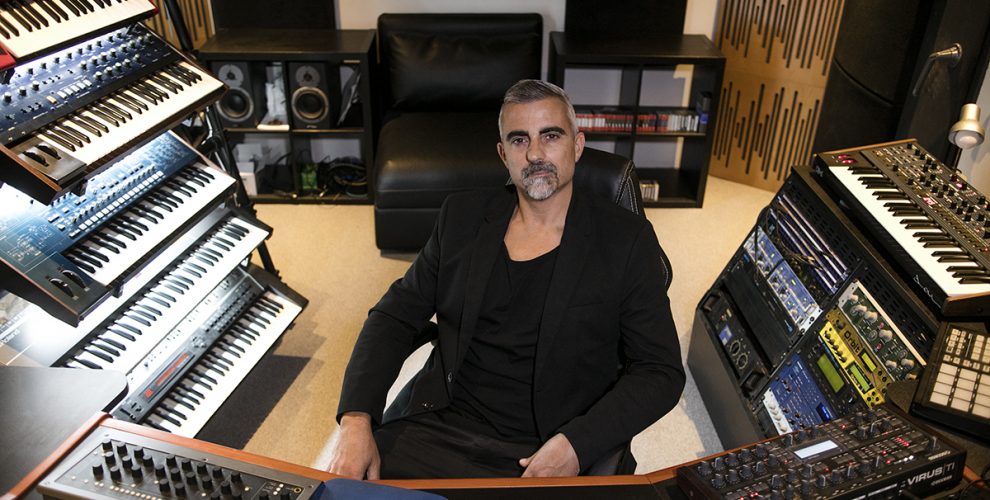 Along with compatriots such as Marco Carola, Danilo Vigorito and Rino Cerrone, Parisio helped establish his hometown of Naples as a mecca for tough, uncompromising beats with his Conform Records label setting the template for others (including a new generation of Naples artists, such as Joseph Capriati, Anfisa Letyago and Luigi Madonna) to follow.

Having followed the success of Conform with the ART (Advanced Techno Research), Southsoul and Adagio projects, Parisio stepped away from DJing in 2007 to focus on making music, as well as seeking to inspire the next generation of techno producers.

With this in mind, the now-Barcelona based Parisio has relaunched the Conform imprint with two monster releases that level into the label’s back catalogue – Conform 20th Century (1997-2000), which was released on 7 May, and Conform 21st Century (2000 onwards), which is set to land on 21 May. You can purchase them here.

Speaking from a purely personal level, as big fans of his old Gaetek output, we here at 909originals are delighted to have Parisio back, and we had the chance to catch up with him to discuss the label, the Neapolitan techno legacy, and a lot more besides.

We’re now just over a year into the pandemic – apart from the obvious impact, how has it been for you? Have you found it creative in any way?

I must say that this period during the pandemic has been one of the most important periods in my life, in a positive way. First of all, I’m about to become a father for the first time and I think this might be enough. But also, from a creative and working point of view, it was very good. I have made a lot of music and have been very busy relaunching Conform Records.

What prompted you to revive Conform Records – did you feel you had unfinished business there?

I decided to resume the Conform project because I still strongly believe in the vision and principles that led me to create it in 1996, otherwise I would have started something new. I believe that today, it can only make a difference if you stay true to your ideas and not ride the wave of the latest trend. The first responsibility for me is not to betray those who have continued to love and support Conform after almost 25 years, as well as to pass on the key message behind this project to the new generation.

You have decided to delve into your back catalogue with the Conform Re-Touched series and now the Conform 20th Century release. What have you learned from this experience, going back and re-discovering your old material?

I love that you used the word ‘learn’, because I realised that the 47-year-old Gaetano Parisio learnt a lot from the 25-year-old Gaetano Parisio. In particular, listening to all the material I realised that sheer simplicity and not being conditioned by so many rules, always leads to better results. Today, too often we’re conditioned by the market, by social networks and by many technical notions that lead us to not be completely free. I can almost say I tried to unlearn what I didn’t need. Let’s just say it was definitely inspiring.

We’re huge fans of the techno from that mid/late 90s era: labels like Tortured, Primate, Drumcode, Kobayashi. This was the period in which you developed your sound – what was it about the techno at that time that was (and still is) so powerful?

Being free allows you to try to raise the bar, which is necessary for research. I don’t consider techno just ‘entertainment’, I fell in love with it because it also contains aspects of counterculture.

What are your short- to medium-term plans for the newly-relaunched Conform – what are you going to do differently than before?

After the first four releases of the Re-Touched Series, which will continue in the future with other volumes, I am finally ready to release my first record on Conform in 15 years. It will be a double vinyl, but it will not be an album. My intention was to resume the speech that had been interrupted for so long. I have worked a lot for this and I think I have finally found a setup that allows me to give a precise imprint to the music that comes out of my studio. I believe it is absolutely necessary to be recognisable. Something that’s very different nowadays is everything that revolves around the music, starting with communication. For the rest, I tried to keep myself as faithful as possible to Conform’s past, starting with involving those who worked with me at the beginning of the project. Subsequently there will be space to produce new artists, perhaps from the new generation. I like the idea of ​​giving the new generation the opportunity to have a platform that allows them to show their qualities and above all their vision of music.

You stepped away from music for a few years – what prompted you to return?

I never left music – I could never do it! I’ve continued to work in the studio non-stop, it’s my medicine. What I left behind was the decay built around the music by the industry itself and the clubbing scene. The reason for my return is the same reason as to why I stepped away, the love. Today, I made peace with myself and I think that communicating through music is probably what I do the best. In addition, the love and the support from those who, despite the long hiatus, have always pushed me to resume my journey. I was also very surprised by the amount of young people who, although could only have been a few years old at the time, knew very well what I had produced in the past. Maybe this is the coolest thing of all. Today, I think that simply going back and continuing what I used to do in the past, without adapting to the market, could make the difference. Also, there are no other options for me!

The scene you have returned to is quite different, particularly when it comes to recognition and getting noticed – for some artists, social media is as important as creating music. Has that been good or bad for the industry do you think?

If I have to answer in terms of ‘good’ or ‘bad’, then it is definitely good as your question was about the music industry. It’s definitely bad if your question was about the music itself. I always say that the underlying motivations that drive you to do certain things make the difference. If your goal is to be rich and famous it will be very difficult for you to do something artistically valid. The first must be a consequence of the second and not vice versa. For the rest, I like to repeat that ‘if you don’t like a place, you always have the option to leave’, just like I did in the past. For me there is no good or bad, right or wrong. I see it rather as being suitable for me or not.

You were one of the founders of the so-called ‘Neapolitan techno’ sound – what was it about living in the city back then that helped create this movement?

Naples in the nineties was a cauldron of energy ready to explode not only from a musical point of view but in all forms of art – as if we had experienced a renaissance after a dark period, dictated by social problems and economic depression. The luck that several artists met and developed a new musical vision together, created the magic. I always say that the creative synergy of quality artists, when dictated by good and ‘healthy’ principles, brings results that stand the test of time. I think this is what happened in Naples at that time.

We spoke to Luigi Madonna a while back, and he spoke about how the Neapolitan techno DJs tend to help each other out – releasing on each other’s labels, remixing each other, etc. Do you share that strong sense of community?

I’m very pleased with what Luigi said. As I said, I think it’s very important. Luigi belongs to the new Neapolitan generation and I’m extremely pleased to discover that this still happens. I no longer live in Naples and I also belong, as mentioned, to another generation. Currently, in Barcelona, there are several artists with whom I speak quite frequently and I share different aspects of my work. You never stop learning and when you meet someone like you who likes to reveal their tricks, the learning process is much faster.

What sort of dance music scene will emerge when the COVID crisis passes – what will have changed?

I believe it will resume exactly where it left off. I remember that during the lockdown, the photos being circulated were the ones that showed how nature had started to live again and how many animal spaces were finally back in a world degraded by man. In Naples for example, we have seen the return of dolphins and whales! Then, when man regains possession, everything will be back as before – or even worse than before. Lust for money and short memory are evils that belong to man in any field. And unfortunately, our field is one of them.